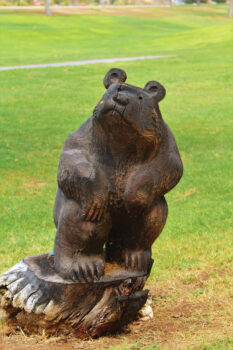 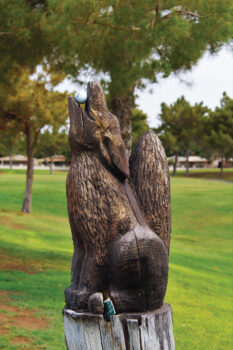 In 2021, we are showcasing the golf course carvings by highlighting a carving (or two) each month. Let us start with the history. In 2006 Leo Buries, our golf course manager, was left with dead and downed trees from the monsoon season. Rather than pay for the removal of the stumps, “Chainsaw Bob” Jordan, rumored to be a homeless man living in his vehicle, was commissioned to do the carvings. Chainsaw Bob had been selling his artwork along Riggs Road near the course, and has long since passed away.

The first several carvings cost anywhere from $100 to $200 with the “Scottish Golfer” statue on hole 18 costing $400. SunBird residents, fascinated by his work on the course, started sponsoring and paying for the remaining carvings that were done. Several residents had Chainsaw Bob carve tree stumps that were in their private backyards. You may notice his initials carved into the backs of these figures.