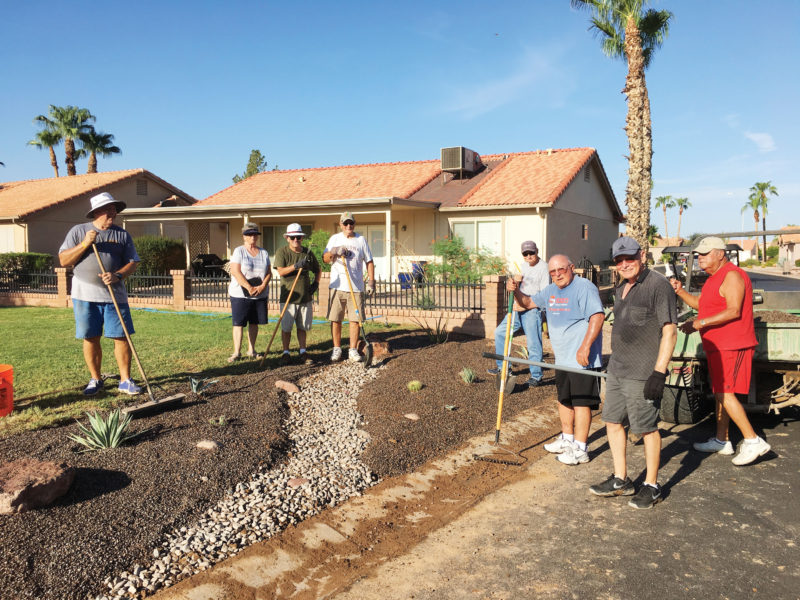 This summer, GoodTime Gals Social Club volunteers and Gudie Huffman of the SunBird Garden Club worked tirelessly to improve an area along LaCosta and Championship Drive. The corner had several bare areas and generally looked very rough due to unwanted golf cart traffic and inadequate watering.

Jack Cooper, a SunBird resident and current vice president of the Golf Board, had a vision for that corner. One afternoon early in the summer, he looked at the corner and sketched some ideas for beautifying the area when a local resident walked by and asked what he was doing. Jack explained his vision for the corner and said he needed some funds to get the project going. The resident, who wishes to remain anonymous, asked if he would stay there for a few minutes, and she hurried away only to return with a $100 bill for him and said, “Put this towards the project.”

Jack contacted Gudie Huffman, who is famous for her landscaping projects with the SunBird Garden Club. Jack and Gudie talked often, sharing ideas, and the project began. Jack secured some more donations from residents Byron Hock and Gary Whistler, who fell in love with the vision. Those donations were used for purchasing plants and potting soil. The SunBird Garden Club donated the cacti, and Gudie, Jack and SunBird resident John Valentine searched the course for beautiful boulders to enhance the landscaping.

Throughout the summer, in three different work phases, with the help of many great volunteers of the SunBird Golf Club, Superintendent Marc Francouer and his turf crew and the guidance of Gudie Huffman, the project was finished on August 24. Thanks to the generosity of SunBird residents, the wonderful SunBird Garden Club, Gudie Huffman and volunteers Glenn Ketchum, Fred Fragga, Loren Wallace, Gary Popelka, John Valentine, Jim Craft, Dean Tucker, Ron Morgan, Ross Bennett, Mike Butler and John Brockish, SunBird Golf Resort is a much prettier place for all of us to live and play golf.