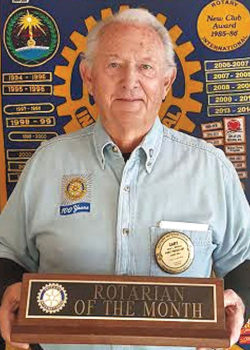 Gary Whiting of Palo Verde was recognized as February’s Rotarian of the Month for the Sun Lakes Rotary Club. Gary has done it all. He has been Club Treasurer, Club President (2000-2001), District 5510 Assistant Governor, and District 5510 Governor (2004-2005). In addition, he is the club’s Sun Lakes Rotary Foundation 2000 President and Dinner Groups Chair, plus a multitude of other responsibilities within the club.

Gary was born in Wenatchee, Washington. His first six years working were that as high school teacher and coach. Then he was a marketing executive with IBM for the remainder of his career. Gary has a BS and an MS from Washington State University. He and his wife Bonnie have four children, three grandchildren and one great-grandchild.

The Rotary Club of Sun Lakes meets for breakfast every Tuesday morning at 6:30 a.m. in the Oakwood Country Club Ballroom. The meetings start at 7:00 and end promptly at 8:00 a.m. Cost of breakfast is $12. To make reservations for any meeting, contact Rotarian Fred DePrez at 480-892-7499. For Sun Lakes residents, if you want to know more about the club, contact Charles Loew at 602-721-3680. SunBird residents should contact Walt Mills at 480-883-8007. www.sunlakesrotary.com.