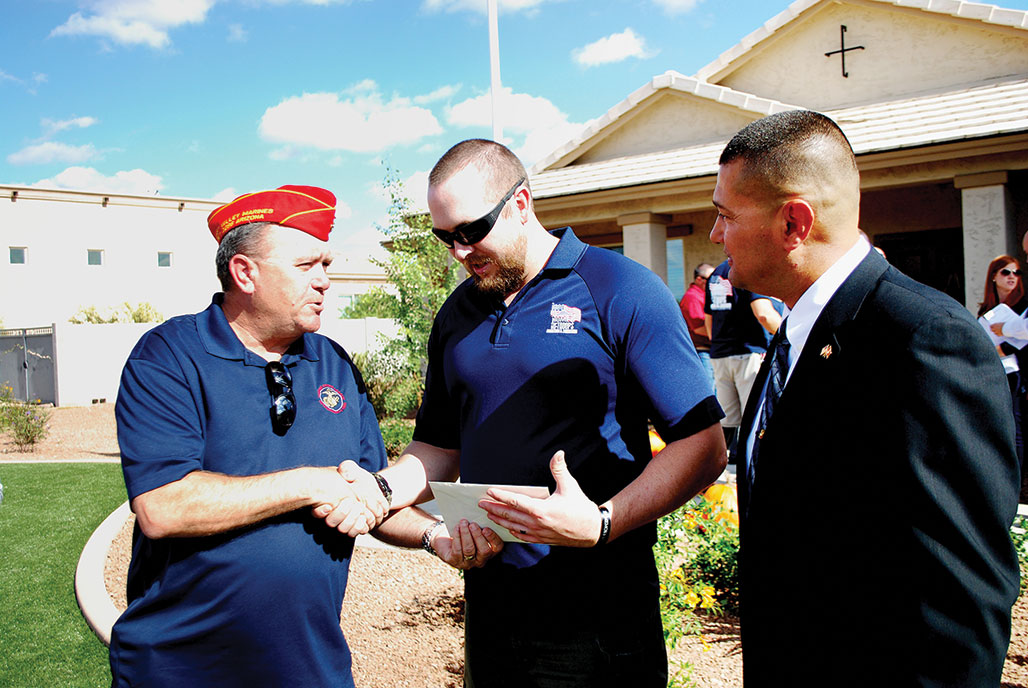 East Valley Marine Pat Rice presents Sgt. Robert Bruce with a certificate for donation from the detachment while Marine Master Sergeant Salvador Marquez of the Wounded Warrior Regiment looks on.

On Saturday, November 15, Homes for Our Troops presented Sgt. Robert Bruce with the keys to his new home in Mesa, AZ. Representatives from the East Valley Marines, Detachment 1296, were on hand and provided Sgt. Bruce and his wife, Megan, with a new bedroom set and a donation to fill his refrigerator.

Marine Sergeant Robert Bruce was on his fourth deployment when he lost both of his legs and suffered multiple shrapnel wounds from stepping on an IED in the Helmand Province, Afghanistan.

While providing security for the squad’s minesweeper, the 3rd Battalion 5th Marines were making their way up a hillside clearing IEDs so that the area could be used for future operations when the Marine ahead of Sgt. Bruce triggered an IED and lay injured. Alerting his squad to the incident, Sgt. Bruce went to administer aide to his injured comrade and triggered a second IED with the blast traumatically amputating both of his legs below the knees. Lifesaving measures prepared Robert and the other injured for medical evacuation by helicopter.

Detachment 1296 is proud of Sergeant Bruce’s efforts on behalf of our country, and we were honored to participate in recognizing this Marine.