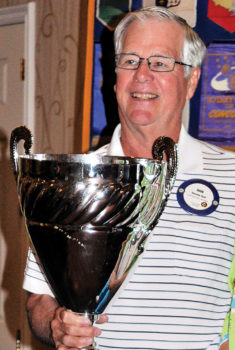 A few years ago, the Sun Lakes Rotary Club enjoyed the membership of John McCain before he passed away. John served in the Army Air Corps during WWII and was a gunner in a B-24 Liberator that was shot down over Germany. To the membership, his friends and neighbors, John became known as the “Good Guy” who always had a smile, told a good joke and provided a positive outlook. As such, the “Good Guy” trophy was born and is presented each year to that Rotary member who best portrays being a good guy within the club. This year, Don Bell was recognized.

Don has chaired the club’s Charity Golf Tournament over the past few years. This is the club’s major fundraiser, and each year (now 24th year) it keeps getting bigger and bigger. Under his leadership, this year’s tournament was the best yet in terms of participation and dollars raised. It takes months of planning and making certain that all the members are involved to make it a success. Don does this with a smile, positive comments and making it fun.

Don and his wife Georgeann live in Oakwood.