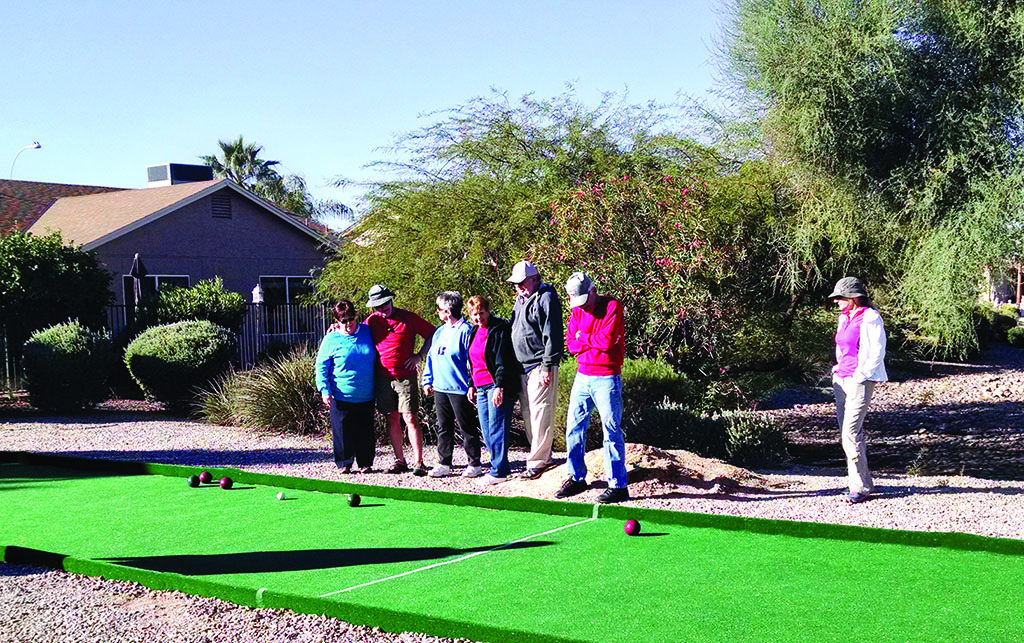 Spectator seating is now available at the Bocce courts. 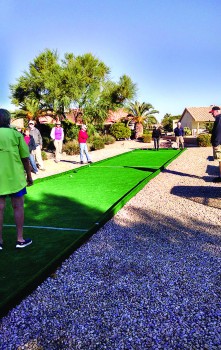 Bocce is going strong at SunBird! This fall has seen some wonderful improvements including new turf on the court and the addition of a spectator’s seating area. A very special thanks goes to the HOA Board, Planning Committee and the SunBird staff for all their hard work and dedication to this project.

After years of discussion and debate, a trial bocce court was constructed and is being used by many SunBird residents. The HOA Project Planning Committee has long debated the feasibility and space considerations for a bocce ball court area at SunBird. After studying what other communities have done and exploring possible location sites for the court, their efforts have made this sport a reality here at SunBird. We hope the continued success of this project will mean a permanent and professional court could be constructed in the future.

The trial court is located at the intersection of Championship Drive and Kerby Farms Road. The court may be used from 7:00 a.m.-7:00 p.m. by all SunBird residents and their guests. The bocce ball equipment is in the storage bench on the south side of the court. Use the code – 8524 to open the lock. There is no vehicle parking on Championship Drive so we encourage everyone to use golf carts or bicycles and park those on the designated gravel areas. To accommodate our close neighbors, please keep your celebrating down and the area free of debris.

The Bocce Ball Club has team play at 8:00-10:30 a.m. on Mondays and Wednesdays. Anyone may sign up to participate in the club play on the sign-up sheet clipboard in the Clubhouse Library. At other times the court is available for open play on a first come basis. We ask that players limit their game to 11 points if others are waiting. You may also reserve the court for your use or organization.

The Sunbird Irish Club gathered on October 28 to see a bocce game played, discuss the rules and have instruction from some experienced players. Everyone who wanted to play was able to try out the new sport. The Irish enjoyed the game and have now reserved the court each Monday afternoon. If your organization would like to have an event at the bocce court, contact any of the committee members.

In January the bocce court will host some special tournaments and events, as well as some challenges as different clubs in SunBird show off their bocce ball skills. Come join us any Monday or Wednesday morning to see the sport being played and learn more about bocce. It is a game for all ages and physical abilities. Newcomers are encouraged and you’ll be surprised at how good a player you are!

This SunBird test project needs everyone’s support to make it a permanent part of the community.