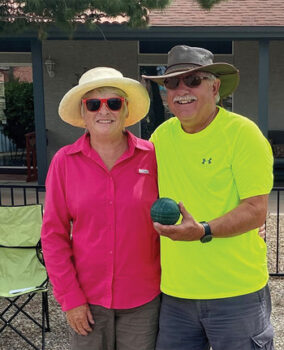 The 2022 Bocce Ball Marathon is complete. The competition was amazing, with SunBird residents showing skills they didn’t even know they possessed. From the second week of January through mid-March, over 60 SunBird residents participated in over 700 games of bocce. The marathon participants were divided into three leagues, and each competing team played each team on their league roster. Cash prizes were awarded for the top four places in each league. Competition ended March 19. The playoff event was held on March 26 with participants and spectators. Congratulations to all!

Our top champions for the marathon were the Nice and Kozy team of Wayne and Bronwen Kozak. The other league winners were Da Brothers: Bob Bitler and Doug Davidson, and Double Trouble: Layne and Meghan Varney. Congratulations to all the teams for a fantastic marathon.

SunBird is looking forward to another bocce ball marathon in 2023.