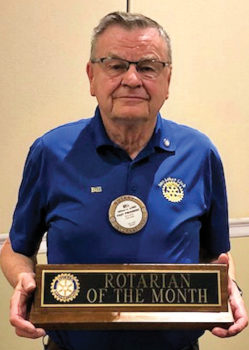 It came as no surprise to Sun Lakes Rotarians that Bill Schink was named their Rotarian of the Month. If there is hard work to do in organizing the Sun Lakes Rotary Club’s Charity Golf Tournament, Bill is THE man. For the past few years, he has chaired the event. This year, he stepped back to take a much-needed rest. Wrong. He stepped back into the thick of it. His tireless efforts have been instrumental in bringing this annual tournament to an exciting new level, with record charity giving.

Bill joined the Sun Lakes Rotary Club almost 10 years ago, serving as president in the Rotary year 2013-2014. He is a retired manager of Business and Strategic Planning for the Electronics Division of Ford Motor Company. His skills developed at Ford have served Sun Lakes Rotary Club well. Bill and his bride Barb of 55 years live in Oakwood. They have two daughters and two grandchildren.