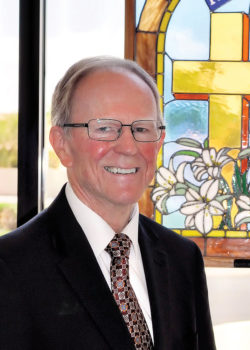 Several weeks ago, Americans celebrated the 50th anniversary of a crowning achievement that reflected years of human creativity and ingenuity. On July 20, 1969, Neil Armstrong and Buzz Aldrin became the first persons in history to walk on the moon. What a historic event! Of course, at the same time, we recognize that the creative abilities of human beings are limited. Only God has unlimited ability and power. Only God can create matter out of nothing. He simply spoke the words “Let there be…” and it happened! (Genesis 1:3).

Perhaps you will recall that the year before Apollo 11, the crew of Apollo 8 traveled to the moon but did not land on it. As the crew orbited the moon on Christmas Eve, they read from Genesis 1 while transmitting to about one billion people worldwide a breathtaking view of the earth rising above the surface of the moon. And yet, our earth is but a speck in our solar system. Furthermore, we’re told that our sun is one of approximately four hundred billion stars in the Milky Way, and our medium-sized galaxy is a part of some two trillion galaxies! Surely, we can say with King David: “The heavens declare the glory of God, and the sky above proclaims his handiwork” (Psalm 19:1).

Yes, we marvel at the Apollo moon missions, especially when you consider that their spacecrafts traveled at a top speed of approximately 24 thousand miles per hour on their way to the moon. And we’re told that even though they were built 50 years ago and accomplished so much, they were controlled by a computer with far less computing power than our cell phones! Still, we have explored such a small fraction of the universe.

Furthermore, we see in the Bible that God is pictured not merely as our all-powerful Creator, but also as One who cares deeply about us as we traverse our tiny planet in the midst of such a massive universe. As Stephen Stein has so aptly put it: “God so loved weak and sinful sinners like us that he sent his one and only Son to the tiny blue speck orbiting an ordinary star on the edge of the Milky Way galaxy, so that whoever believes in him might have eternal life. What an amazing God.”