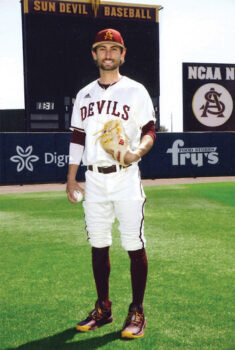 I want to share the best thing ever that happened in our family this week. My grandson, ASU’s shortstop Drew Swift, was picked up by the Oakland A’s baseball team in the 2021 MLB Draft in the eighth round—pretty impressive.

Drew went to Hamilton High, played shortstop, and won several awards throughout his four years there. He then went to ASU and was on the team there. His position was again shortstop.

He earned several awards. Among them was Best Pac 12 Defensive of the Year, 2021. He was the first player in the program history in the conference to get this award. He also won the Rawlings Golden Glove Award. To get this award, you need to be the best shortstop in the entire country. Again, pretty impressive.

Drew has always been very respectable and helpful, studied hard, and graduated. All through his life, his motto was to “work hard.”

His parents are Pat and Robin of Chandler, who are very proud, and, of course, his grandma Shirley Vivone of SunBird.