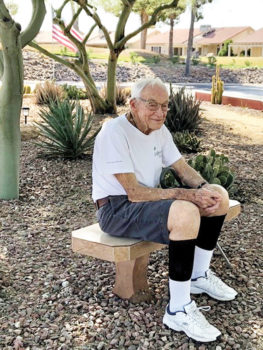 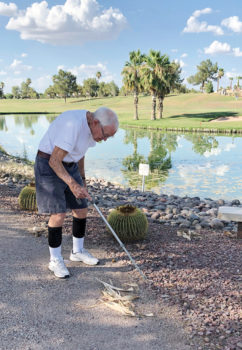 Jerry picking up debris in SunBird

My name is Debbie, and I am Gerald Misner’s oldest daughter. Jerry lives at 6301 S. Tournament Lane and is one of the original residents in SunBird. He and my mom Sue moved into the first phase back in the early 1990s. Jerry has quite a long history of being involved in many endeavors with the HOA, but with his age (he turned 90 in February), he has slowed down quite a bit. Despite this fact, he still walks to the clubhouse daily (at the crack of dawn or often before dawn). Recently, he observed that there was a common area along the route that had debris down from the wind, so he spent a couple of hours tidying up the area. Since then, he has taken it upon himself to stop by this scenic lakeside spot during his return walk home to make sure that it is picked up and looking “spiffy,” as he likes to say! He collects any debris he sees in tidy piles so the gardeners can easily stop and pick them up.

I think that it is pretty cool that Jerry has “adopted” this area as a place he takes pride in being a part of maintaining. One of the best parts of volunteering is finding something that needs doing without being asked. Jerry has done this kind of thing his whole life. I talk to my dad daily, and he always tells me of his tidying efforts in this special spot at SunBird! Last week, he was thrilled to see one of those special painted rocks hidden near the bench.